Kevin was born in Cincinnati, Ohio, to his parents, Don and Nancy Hillman.  He attended Fairfield High School in Fairfield, Ohio, graduating in 1993.  During high school, Kevin played both high school and club soccer and earned his Eagle Scout award.  After high school, Kevin attended Centre College in Danville, Kentucky on an Army ROTC Scholarship.  In addition to ROTC, Kevin was a member of the Centre College soccer team, active in student government, and a member of Beta Theta Pi fraternity.  After graduating with a Bachelor of Arts in History and Government, Kevin went on to attend the University of Cincinnati College of Law.  Kevin was a member of Moot Court, Student Court, and the Phi Alpha Delta legal fraternity.  Kevin graduated with a Juris Doctorate Degree in 2000 and became a member of the Ohio Bar the same year.

During law school, Kevin worked for the Office of the Butler County Prosecuting Attorney in Hamilton, Ohio.  Kevin began as a law clerk, received his legal intern license to prosecute misdemeanors, and eventually worked his way up to become an Assistant Prosecuting Attorney upon passing the bar exam.  Kevin left the prosecutor's office in January 2001 to begin the Judge Advocate Officer Basic Course at the United States Army Judge Advocate General's Legal Center and School in Charlottesville, Virginia.  Upon completion of his basic course in April 2001, Kevin moved to Waynesville, Missouri to begin his assignment at the Office of the Staff Judge Advocate at Fort Leonard Wood.

Although not a native of the Ozarks, Kevin and his wife fell in love with the area and the people of the Ozarks and decided to make Pulaski County their home.  Kevin transferred from active duty to the Missouri Army National Guard in April 2006.  During his time in the Guard, Kevin has served as the Deputy Command Judge Advocate for the 35th Engineer Brigade at Fort Leonard Wood and now currently serves as Chief of Military Justice.  In that capacity, Kevin is the Missouri Guard's chief prosecutor and works at the Joint Forces Headquarters in Jefferson City, Missouri.  Kevin has also completed the Judge Advocate Officer Advance Course and Intermediate Level Education at Command and General Staff College.

After active duty, Kevin was admitted to the Missouri Bar and Kevin transferred to a civilian legal practice at the law firm of Smith and Turley in St. Robert, Missouri.  Kevin's areas of practice included criminal defense, civil litigation, collection actions, creditor rights in bankruptcy, and business litigation.  In 2007, Kevin was appointed St. Robert City Attorney.  In this role, he serves as both the city counselor and city prosecutor.  As prosecutor, Kevin has overseen a caseload of over 2000 cases per year in the St. Robert Municipal Court.  In 2009, Kevin was also appointed as the Municipal Judge for the City of Waynesville, overseeing a docket of nearly 1500 cases per year. 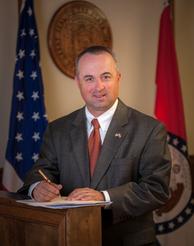